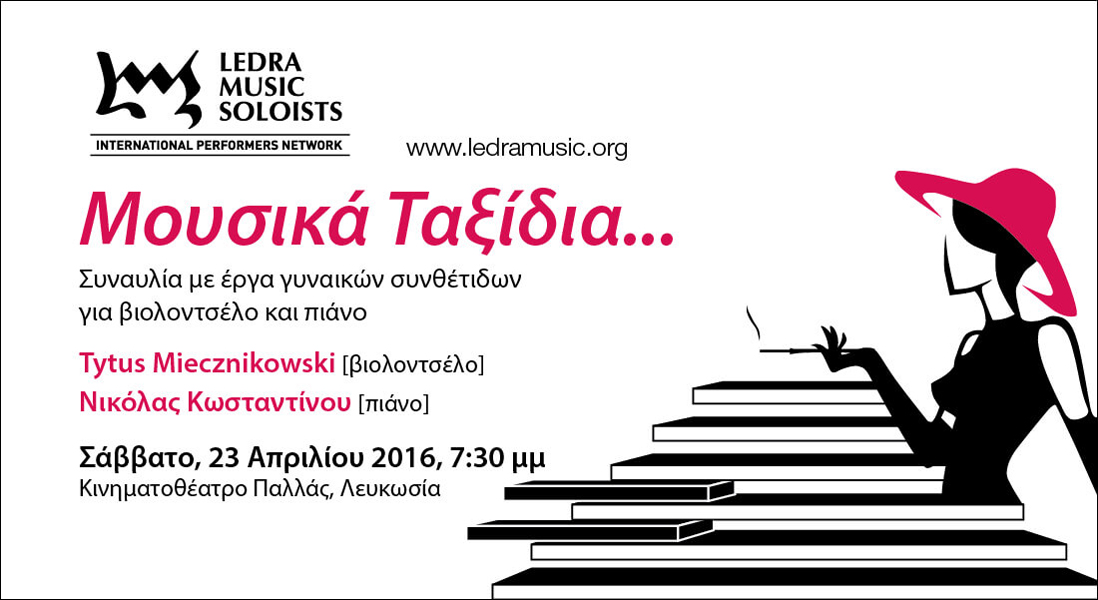 Musical Journeys:
Recital with works by female composers for violoncello and piano

The mores and graces of earlier times would often preclude talented female composers and performers from being recognised. Tradition deemed it only proper that women restrict themselves to the domestic arts and leave the concert hall to the men. Most of their efforts would usually end up as accessories in drawing rooms and recital parlours, while only a small number of works would receive significant recognition.Ledra Music Soloists presents a recital for violoncello and piano concert dedicated to works by female composers. The concert invites us to a musical journey with a rich and diverse programme ranging from works dating from the 19th, 20th and 21st centuries from countries such as France (Renié), Germany (Le Beau, Senfter), Poland (Bacewicz), USA (Beach) and Cyprus (Athinodorou, Aifotiti).

Tytus Miecznikowski was born into a Cracow family of artists in 1964. He began to play the violin at the age of six, studying with Czesława Klimczyk and Eugenia Umińska, but later dedicated himself entirely to cello playing. After his solo diploma at the Franz Liszt Academy of Music in Budapest, where he studied with Miklós Perényi, he completed his studies at the Bern Conservatory of Music with Walter Grimmer and Johannes Bühler. From 1988 until 1990, he was first solo cellist in Deutsche Kammerphilharmonie. He lived and worked as a soloist and chamber musician also in Basle, Turin and Lugarno.

Tytus Miecznikowski has performed with various ensembles on the stages of Europe between Moscow and London. He has participated, among others, in Warsaw Autumn, the Baden-Württemberg Festival of Polish culture, the West German cultural program “Music of the Federal Republic of Germany in Russia”, the festivals of Gödöllő und Keszthely in Hungary, the Ledra Music Soloists Chamber Music Festival in Lefkosia, Cyprus, and the Longlake festival in Lugarno. Tytus Miecznikowski’s solo and chamber music repertoire covers a wide range of works of the European classical tradition, from baroque to contemporary music. He has premiered the work Concerto per archi II by Zbigniew Bujarski (in Cracow and Warsaw, 1994), Orniphania for cello und piano by the same composer (Cracow, 2003), Belenos by Martin Metzger (Basle, 2009), A stone in my shoe by Art Clay (Basle, 2009); the Sonata for cello und piano by Beat Schönegg (Basle, 2012) and, one year later, Beat Schönegg’s Concerto for two celli and a viola and Martin Metzger’s Saitentänze.

Nicolas Costantinou is renowned for impressing his audience with his daring selection of repertoire, old and new, and his ability to perform with extraordinary instrumental ensembles. He has been hailed by critics as ‘…an artist of deep emotions, who is capable of performing music with his whole being and soul…’ whilst his interpretations have been described as ‘colossal’ and ‘dramatic’.

He has given numerous concerts in Austria, Cyprus, Hungary, Germany, Greece, Finland, France, Portugal, Turkey, Switzerland, the UK and the USA and regularly appears in prestigious halls such as Wigmore Hall, the Brahms Saal of the Musikverein in Vienna, the Beethoven-Haus in Bonn, and the Grand Hall of the Franz Liszt Academy of Music in Budapest. He is regularly invited to perform at international festivals around Europe such as the Kuhmo Chamber Music Festival, the Oulunsalo Soi Music Festival (Finland), the Gödöllő Chamber Music Festival (Hungary), the Ledra Music Soloists International Chamber Music Festival and the Kypria Festival (Cyprus). His debut in London’s prestigious Wigmore Hall was received with favourable reviews. He has performed with the Philharmonia Orchestra, the Russian Chamber Philharmonic St. Petersburg, the Budapest Concert Orchestra, the Failoni Chamber Orchestra, and the Cyprus Symphony Orchestra, with maestros such as Konrad von Abel, Juri Gilbo, Esa Heikkilä, Notis Georgiou, Spiros Pisinos, Maciej Zoltowski and Ayis Ioannides. In the field of chamber music, he has performed with Gustav Rivinius, Erkki Rautio, David Cohen, Péter Somodari, Vilmos Szabadi, Tytus Miecznikowski, Gábor Varga, Francesco Quaranta, Wolfgang Schroeder, Margarita Elia, Kyros Patsalides, Chloë Hanslip, Kazuhiro Tagaki, and the Meta4 and Akadémia String Quartet. He regularly performs works by Cypriot composers in Cyprus and abroad, including a number of world premieres. Dr Costantinou has recently performed for the first time in Cyprus Beethoven’s complete works for piano and violin with violinist Nikos Pittas and for piano and violoncello with cellist Péter Somodari.

Nicolas Costantinou graduated from the Greek Hellenic Academy of Music, the Ferenc Liszt Academy of Music in Szeged, the Ferenc Liszt University of Music in Budapest summa cum laude and holds a Master of Music in Performance from the U.S. Cleveland Institute of Music. Recently, he has been awarded a doctorate of philosophy (PhD) from London’s Royal College of Music under the supervision of Prof. Paul Banks, Dr. Julian Jacobson and Dr. Jane Roper. His thesis is entitled The Chamber Music of Ernő Dohnányi; Tradition, Innovation and ‘Hungarianness’. He has also studied with Márta Gulyás, Dr. Daniel Shapiro, Sándor Falvai, Ferenc Kerek, Tania Economou and Wanda Economou-Constantinou and he has participated in master classes held by acknowledged pianists such as Dmitri Bashkirov, Nicolas Economou, Vadim Suchanov and Ferenc Rádos.

Nicolas is currently teaching prodigious children in his home country. Many of his students have won numerous prizes at international piano competitions, and have participated in esteemed piano master-classes with renowned professors. Some of his students have been accepted in highly esteemed Academies and Universities, amongst others the Reina Sofía Escuela Superior de Música in Madrid and the New England Conservatory of Music in Boston, USA. Dr Costantinou is currently a Lecturer at the University of Nicosia and also teaches at the Nicosia Music Lyceum.