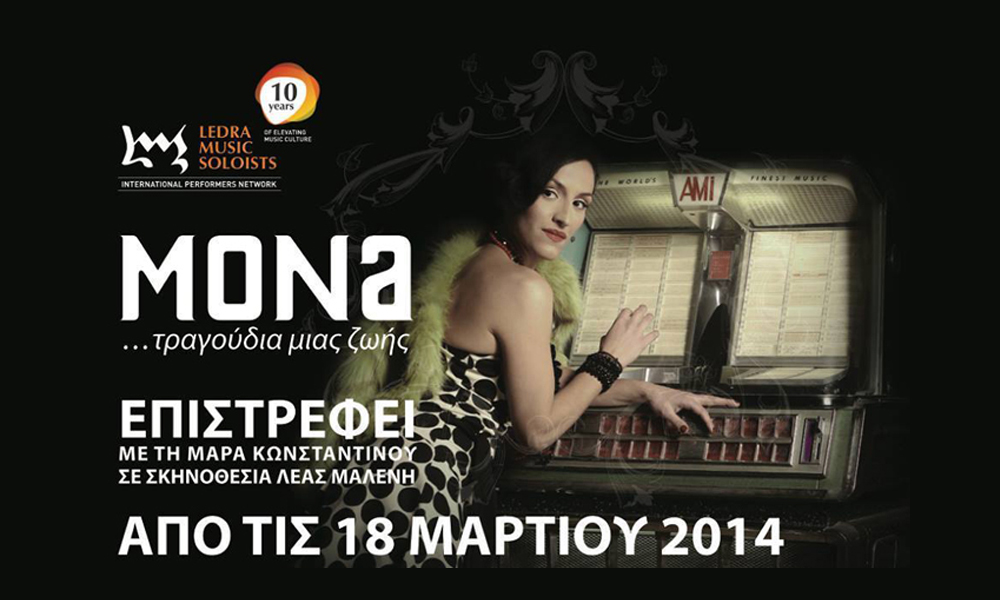 After the tremendous success and enthusiastic reception, the production “MONA …songs of a lifetime” returns for a limited number of performances. Book your seats in time!

…songs of a lifetime

Actress Mara Constantinou, a group of elite actors and a group of four virtuoso musicians meet with director Lea Maleni in the old town centre and together they create a show of coloured memories and interactive contradictions, inflicted with humour, sarcasm in rejuvenating injections of jazz. A journey through time accompanied by songs and words that marked love, through different people. Stormy relationships that ended, confessions that remained, hidden desires never accomplished, relationships and sharp words. An adventurous penetration in the depths of the abyss of relationships, of the eternal struggle between female and male as seen through real and imaginative stories of the charming faces of life, of the imagination, and of the stage.

A trip concerning love, MONA focuses on the story of a woman and the stages in her life as well as the persons that marked it. Through her personal life path, the timeless love-story portrait of mankind is depicted. MONA is an adventurous journey through space and time with the complexion of a dream, during which reality flirts with imagination, through the unanticipated and unexpected love with songs that inspire theatrical effects in alternating roles. An exciting life confession of multiple moods that outlines human personalities and their real timeless passions and errors and in which the viewer is likely to recognize something of himself or pieces of the puzzle in his surroundings.